To promote the Transformers 2 – Revenge of the Fallen DVD / Blu-Ray release, Paramount innovated.The company decorated the cars of Ryan Newman and Jeff Gordon with the visual cues of Optimus Prime and Megatron, respectively, in the October the 17th race (image below). Difficult to get a better fit… 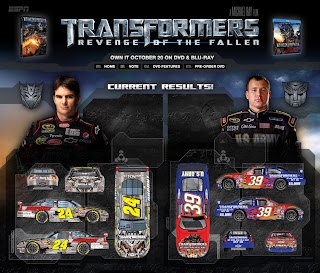 To amplify the activation, the company partnered with ESPN, that ran a poll on which car was the favourite (check out on the video below).
None of the drivers won the race, but the film launching and the sport and film fans definitely did, a lot!
Source: Carlos Merigo, in Brainstorm9