Simon Chadwick talks about London 2012 learnings and much more 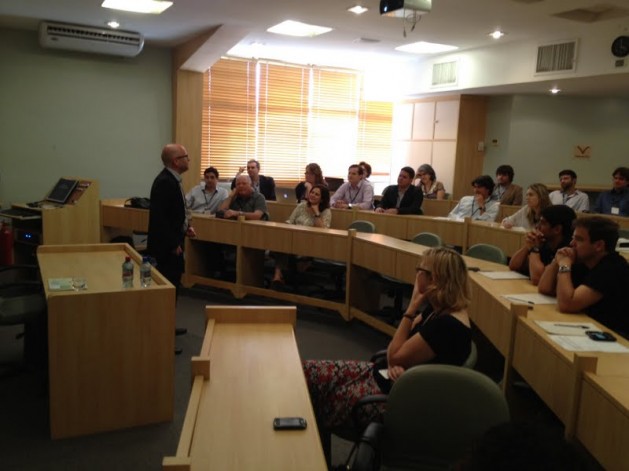 A couple of months ago Simon Chadwick, one of the main european sports marketing academics, presented a lecture about the London 2012 learnings, Rio 2016 challenges and also a little bit of ambush marketing. The event was organized by the British Council and Coppead (Rio de Janeiro Federal University). Simon Chadwick is a professor at the Convetry University, the Centre for the International Business of Sport director and consultant for brands around the world.

He opened his lecture talking about Olympic Games in a broader context. London 2012 was attached to a plan to revitalize the west side of the city, incentivate sports practice amongst britains and show the world the most creative side of the UK economy and culture.

Talking about numbers, sometimes the olympic experience can be traumatic. Montreal 1976 was paid by local taxpayers until a few years ago. London 2012, on the other hand, will probably break even, although the real gains are more in image than financial. In that matter Brazil, should have clear goals of what to expect with the events in 2014 and 2016.

Another subject was the necessity of a plan B. Chadwick said that London 2012 had alternative places to all arenas and stadiums, in the case one of them wasn´t ready. In the end everything was alright and London 2012 was considered one of the most organized games in history.

In the second session, about ambush marketing, Chadwick presented several recent cases, such as the Dutch brewer Bavaria, which seems to be specialized in this type of campaign. At South Africa 2010, they were caught by FIFA and had to sign an agreement promising not to ambush the next five editions of the event. Why five? It´s a mistery.

According to Chadwick, ambush marketing increasingly goes beyond opportunism, becoming a platform for brands with attitude. In many cases, the increasing regulation of sponsorship contracts turns the public opinion against the events organizers and in favor of brands that break the rules. Moreover, these contracts end up restricting the sponsoring brands.

In short, the professor made it clear that Brazil will have a unique opportunity in history, but we must be prepared for it. The key is clear goals and a good plan.