For those who do not know brazilian football well, this post needs a little contextualization.

Copa Libertadores is the South American version of Uefa Champions League. It´s the most important continental title a brazilian football club can win, and until recently, Corinthians had none. All the rivals made a lot of jokes about that, and every year Corinthians qualified to Libertadores, there was a huge pressure to win it. Something like the famous Boston Red Sox´s curse.

But all curses are meant to be broken, and so was Corinthians´. The club finally won Libertadores this year, unbeaten and facing Boca Juniors, the biggest Argentinian club which won several titles in the last decade, specially against Brazilian clubs, in the final.

Can you imagine the tension in the air? For 2 weeks it was the only subject in the country. Even for those who hate footbal (believe us, there are a few in Brazil). In the final game, 3 in 4 TVs were tunned on the game.

In recent history, there wasn’t a match with a bigger sponsors’ participation. Below, there is a compilation of what they did to help support Corinthians in this important moment. All videos are in portuguese, but you can sense what each one is about.

Well, we don´t support Corinthians here, but it was a big sports marketing lesson to all clubs and sponsros.

Right after the finals they launched this timeline with the team’s journey. The user must side scroll it to pass trhough the main facts of each match until the final. The brand only appears in the end.

The leading steel wool brand in Brazil released a humourous video with Carlos Moreno, an actor that have been appearing in Bombril ads for decades. Now he is here to joke with Boca Juniors.

Brahma is the second beer brand in Brazil and it has a close link to football. To promote this match they released a video with the club’s anthem played tango style, the traditional Argentinean rhythm.

This radio station is not exactly a sponsor, but they payed a great tribute as well, using São Jorge mythology. São Jorge is a catholic saint, and one of Corinthians’ symbols.

And, finally, Nike released a very polemic letter, just before the final, mocking those brazilians who were supporting Boca Juniors, which they called “the anti-Corinthians”. And they were a lot.

It was a bold move from Nike, and many of the targeted “anti-Corinthians” tried to organize a boycott. 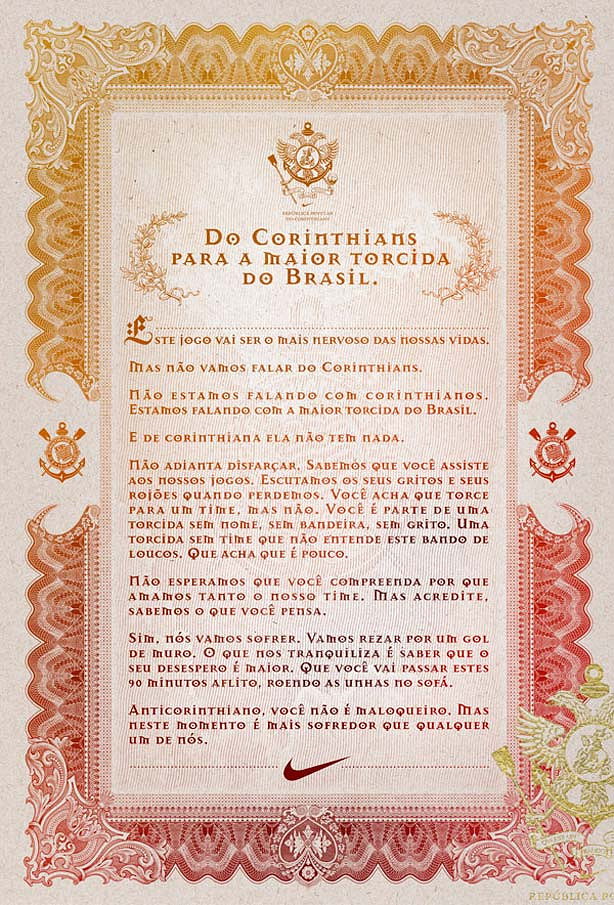 After the final Nike also released this emotional video.

In the end we were more jealous about Corinthians’ sponsors than the title itself. We would love to see our teams´ sponsors doing the same.