Ativa Esporte has recently made a partnership with Synergy, one of the most relevant sports marketing agencies in the United Kingdom and the world.

During London 2012 we contributed to Synergy´s blog posting some thoughts about brazilian point of view.

This is the first post, originally published on August 2nd 2012. 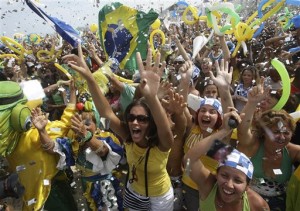 As well as the medals Brazil wins, we are naturally taking a big interest in London 2012 to see what we have to follow. We can’t deny, our heads are already in 2014 and 2016!

Brazilians are following London 2012 in a very new way. For the first time in recent history, the Olympics is not being broadcast by Rede Globo over free-to-air TV. For those not familiar with the Brazilian media landscape, Globo is one of the top 4 media conglomerates on the planet, known worldwide for the quality of its delivery. It has also been the dominant media channel in Brazil for decades, regularly attracting huge nightly audiences. Brazilians joke that if something isn’t news on Globo, then it isn’t news at all.

When the London 2012 broadcast rights in Brazil bid were tendered years ago, Rede Record made a daring move, outbidding Globo for the free-to-air TV exclusive rights. This was a huge development in media competition in Brazil, but it came with implications.

Some athletes and sports governing bodies have complained (some more, some less vocally) that, despite alternating in the audience rankings between 2nd and 3rd places, Record’s reach is far smaller than Globo’s. So, in practical terms, London 2012 became less valuable as a marketing platform, so it can be said there is actually less engagement (natural or forced) from the media, and the public, than is normally the case with the Olympics.

Before the Games, Rede Record tried to pacify stakeholders, promising a great broadcast. One week later Brazilians are engaging with the games, but not primarily via Record. On the first Sunday of London 2012, Record ranked only third among free-to-air channels in Sao Paulo with 1.1 million viewers, losing out to Globo, with 2 million, and also SBT, a more popular channel which is famous for importing Mexican soap operas, with 1.3 million. Terra’s free HD broadcast over the web is also helping Brazilians engage with the Games, especially during business hours.

In this scenario, brands are being challenged to create alternatives to enable consumers to engage with the Games. Step forward – social media!